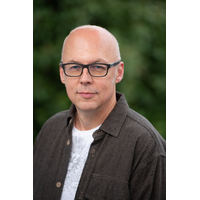 1-Where and when did you first become an editor?  I started editing small projects right out of film school in the early 90's; but my first episodic editor gig was on the series 'Highlander' in 1996 in Vancouver.

2-What is the best aspect of being an editor in your region?  Luxurious editing suites, 2 hour lunches and massive per diems. Or is it mountains, beaches and sushi bars? One of those isn't right.

3-What are you currently working on?  A thriller starring Jamie-Lynn Sigler.

4-What has been an interesting/favourite project so far?  Working in New Mexico cutting the comedy series "Easy Money" in an old hotel.

5-The best thing I’ve learned from another editor is…  Remember your first impression.

6-My advice to any Editor starting out in my city is…  Cut anything you can get your hands on to build your resume and experience. When your opportunity comes for something bigger, be as ready as you can be.