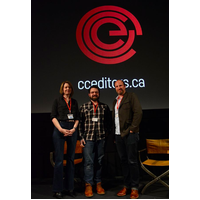 One crisp December morning, I woke up to a constant pinging sound as my phone started going off. Bleary eyed, I check my notification screen – I had won the CCE raffle to go to EditCon! This came as a surprise, as I haven’t even won a scratch-and-win in about fifteen years. But hey – free trip to Toronto? Meet other edit-cave dwellers and talk shop all weekend? Sounds good to me!

So I packed my bag, kissed my wife goodbye, and left chilly Vancouver to arrive in… warmer Toronto. I was expecting The Center of The Universe to be a city of snow drifts, parkas, and traffic chaos. Instead it was pleasantly mild, everyone wore toques, and you have Uber here! Sweet mercy. Uber is a revelation to me, having come from the land where ride sharing had been verboten until about a month ago. Anyways, I digress.

I landed, got settled at the hotel, and found a few old friends and met some new ones at the Out of Towners gathering Friday night. After some jibber jabber, a few beers and a pit stop at a shawarma place for a wrap the size of a trashcan Mac, it was time for bed. Big day tomorrow!

Well, not for too long, but enough to have to miss breakfast at the hotel. Fortunately, I was right next door to the TIFF Bell Lightbox theatre (dare I say, The Center of the Center of the Universe?) so I scurried over and had time for some coffee and snacks and met up with some of the other Vancouver crew that had come all this way. Van City represent! Fueled up on caffeine and pastries, it was time for some educama—edimicat—some learning.

The first panel, expertly moderated by Jonathan Dowler, focused on reality and factual editing and featured four editors – Elianna Borsa, Jenypher Fisher, Baun Mah, and Ian Sit – who are all much braver than I. Why do I say that? Well, if I wound up with 1600 hours of dailies across a whole season as Jenypher does on her series Jade Fever, I would run for the hills. These four shared great stories about working on fast-paced and exciting reality and factual productions, trying to balance incredibly tight deadlines (like delivering with a few hours to air kind of tight) with pulling the best stories out of so much footage. There was a common theme from all the editors that you need to get very creative with your footage to tell the true stories of what’s happening. Jenypher showed a scene from Jade Fever and described it as, and I’m paraphrasing a bit but it’s true, something like 90% true and 80% fake. The story was correct – a buyer visited the work site and bought a chunk of Jade – but the shots needed to tell that story were pulled from many different sequences across two shooting days. Or, in a similar vein, Elianna Borsa and Baun Mah described taking sequences from The Amazing Race Canada where an event happened over some 45 minutes and condensing that to 45 seconds on-screen without losing clarity of story.  It was incredible stuff. To be honest, reality/factual is not a genre I am keen to work in that much, but this turned out to be my favourite panel of the day.

The next panel was This Year in Dramatic Film, featuring three editors with recent critically acclaimed feature films: Mathieu Bouchard-Malo, Lara Johnston, and Sabrina Pitre. They all shared anecdotes about their career paths that had led them to feature work, and some of the challenges and successes working on their latest films. One interesting tidbit they all discussed was the use of test screenings. Freaks which Sabrina edited had 14 test screenings between Canada and LA! The directors didn’t always take the screening notes as gospel, but they were great opportunities to help find the flow and tone of the stories that resonated with the viewers. Lara screened her film Mouthpiece with editor friends for many of the same reasons. All the editors agreed that it was an occasionally painful but always important part of the process. Also, as a random aside, Mathieu spoke en français (moderator Justin Lachance translated) and my high-school French teacher would be pleased to know that even though I haven’t opened my Bescherelle since 2003, I could still mostly understand him.

After a lunch break and more coffee we dove right into the third panel, Timing is (Almost) Everything. Canadian comedy treasure Elvira Kurt moderated and spoke with James Bredin (Schitt’s Creek), Jonathan Eagan (Workin’ Moms) and Marianna Khoury (Baroness von Sketch Show). These three editors all have worked on a wide variety of comedies, but the goal is always the same: make it funny. I found the discussions around workflow on sketch-coms like Baroness very interesting. The editors don’t work on specific episodes but instead would grab a sketch they wanted to do. Later, once the sketches were cut together, only then would the producers/CBC decide which sketches would go into which episodes. Cool!

I’ve heard it said that talking about comedy isn’t funny, so it’s a good thing Elvira Kurt kept cracking wise across the panel and kept the discussion fast and flowing. She also inadvertently nailed a great point: she would ask questions around the challenge of making something funny, or finding the comedy in a certain moment, and all three panelists kind of had the same answer: you just sorta do. Comedy is subjective, personal, and tricky, and it really boils down to experimenting with different scenes in different ways and getting feedback from lots of different people to really pull the best laugh out of a bit. As an example of challenging comedy, Marianna showed a sketch from Baroness von Sketch Show called Unfounded.  The sketch is hilarious but also revolves around police processing of sexual assault cases – not exactly a laugh-a-minute topic. She went into detail about how they addressed such an intense and important topic and used humour to shine a light on a real problem. It was immensely fascinating.

The last panel was a one on one conversation between moderator Sarah Taylor and Susan Shipton. Susan has cut eight films with Atom Egoyan, has recently worked in television on Burden of Truth and The Expanse, and now working the Netflix series Ginny and Georgia.  It was a fun, casual conversation about Susan’s career up to this point and her experience working across a variety of different projects.  I’d love to go into more detail, but my notes for this panel have been lost in the shuffle of moving apartments and my memory is just fuzzy enough that I’d probably start making things up. BUT – what a great opportunity to plug the CCE podcast The Editor’s Cut, hosted by Sarah Taylor, since this panel was recorded and will be an episode later this year! Keep an ear out for this.

Things wrapped up with some draw prizes, then we stretched our legs and found some bevvies in the lounge and discussed all the gems we had heard today. It was a long day, but I found myself walking out of the Lightbox invigorated and excited about what we do for a living. It was great to hear stories across all different genres and formats and reminded me that there is so much more to learn still. But reassuringly, my main takeaway was that no matter the subject, genre, schedule, or format, we’re all still trying to tell the best stories we can.

As a Vancouver resident, time and money to travel east to Toronto are not always easy to arrange, so I’d like to thank the CCE for their generous gift of bringing me to EditCon this year.  I am very grateful for the opportunity and I hope that the CCE continues to hold fantastic events (and raffles!) like EditCon to bring editors from all over Canada together. 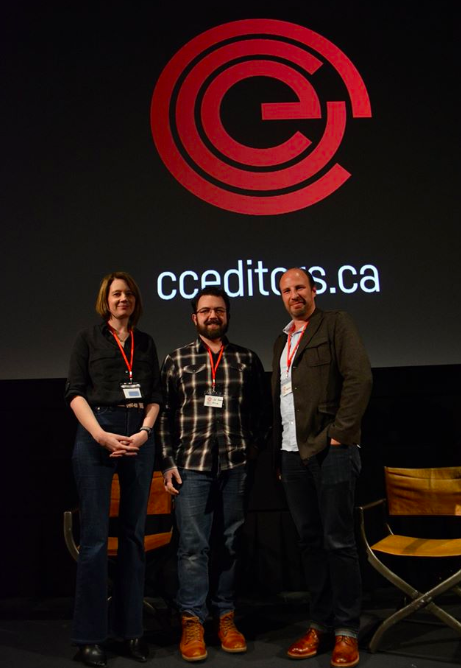