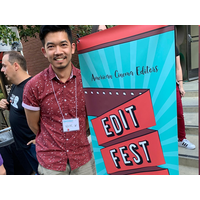 If I could summarize my experience at this year’s EditFest in a few words, it would be; amazing, educational and inspiring! I would like to thank the CCE for this wonderful opportunity and Alison for taking care of the travel arrangements. The hotel was conveniently located across a 24-hour grocery store and a great breakfast place (there was always a line-up there!). It was also in walking distance of Warner Bros Studios – so for future winners of Editfest, plan your visit accordingly. And best of all, the hotel provided a free shuttle that would take you anywhere within 3 miles, including the Disney studios where the event took place.

I arrived at the Walt Disney studios at 9 am at Riverside gate. I immediately recognized the current animation building across the street, the one shaped like Mickey’s hat from the Sorcerer’s Apprentice. Cool! Continuing through the Disney lot, I walked past some of the soundstages and the “Cutting” building, but when I reached the check-in and registration area, I realized that I was right in front of the original animation building! Having grown up with the old animated films, I was overcome with nostalgia. This was where Cinderella, Bambi and Peter Pan were drawn, where Tim Burton and John Lasseter worked as young animators, and, during the shaky times of Disney animation in the 80’s, where the animators had to vacate to make room for the emerging live-action division. Today, the halls of the building are decorated with conceptual artwork and background paintings to commemorate some of their most famous hand-drawn animated films.

Outside, refreshments were served and attendees mingled a bit before we were called into the historic main theatre for the first presentation. It took me a while, but I eventually realized I was sitting right behind CCE president, Stephen Philipson! We got to chat for a while until we saw Paul Day looking for a seat and called him over. It was nice to catch up a little before the presentation started.

Our first panel was called “From the Cutting Room to the Red Carpet” and included panelists, Heather Capps (Portlandia), Nena Erb (Insecure), Robert Fisher Jr. (Into the Spider-Verse), Eric Kissack (The Good Place) and Cindy Mollo (Ozark), where each of them showed clips of their work and then talked about the process behind their work. If you want to know more about the panelists, I’ve scanned the program as a pdf.

Robert Fisher Jr showed two clips from Spider-Man: Into the Spider-verse. The first was the apartment scene where Uncle Aaron teaches Miles Morales some moves to win a girl over – the “shoulder touch”. It’s a sweet and funny bonding scene between the two characters. Here’s a link to the clip (https://www.youtube.com/watch?v=4L73eO8xVjQ) The second was a montage where Miles Morales becomes Spiderman in his universe and leaps off a high-rise building. (https://www.youtube.com/watch?v=eazNXtXuohc) Being a fan of the movie, I loved hearing the behind-the-scenes stories of how these scenes evolved. As it turns out, the initial cut of the apartment scene was cut fairly conventionally, using only the single CU coverage for the character’s lines. When that version was screened, the producers realized that it wasn’t getting a laugh from the audience. Robert found that the simple solution was to give the scene a little bit of breath by cutting to a wide two-shot in the middle of the exchange. And what can I say? It works, and I laugh every time I watch the scene.

Next, Robert explained that the montage clip was originally scripted to be very linear, following Miles on the subway platform, going up the stairs and then seeing him on the rooftop but when the producers saw it, they felt it wasn’t working and that it was lacking something. They couldn’t quite figure out what it was, but asked Robert if there was anything he could do. The result is an energetic montage that jumps back and forth through time. When combined with the music and stunning visuals, you get something that is truly memorable.

The next panel, “Reality VS. Scripted Editing: Demystifying the Difference” was probably my favourite of the whole day. It was very casual and interactive and I loved the chemistry and witty banter that the panelists had with each other (Jamie Nelsen was hilarious!). I was also very interested in the discussion because of the common misconception that if you work in scripted, you can’t do reality and vice versa. The presentation started with a screening of two clips. The first was from the reality series, Naked and Afraid and follows two nude survivalists as they set up their tent and are met with a torrential downpour and flood in the middle of the night. The second clip is an elaborate space battle sequence between the crew of The Orville and the Kaylon (https://www.youtube.com/watch?v=IHsBPoXJOP4). The panelists then asked us what’s similar about the two clips.  Answers included; they both create tension, both are telling a story through the characters POV, one person shouted “VFX budget!” (re blurring private parts in Naked & Afraid), which got a big laugh. Then we were asked, what’s different about the two scenes. One person shouted “Wardrobe!” (it might have been the same person). There were a few serious answers before the panelists finally stopped us and revealed it was a trick question. The answer is: nothing. There is nothing different about the way those two clips were cut. Tom Costantino, who edited The Orville, went on to explain that original script for the sequence was two minutes and had three crashes. The final cut was seven minutes and had 11 crashes and he had to fabricate a lot of moments by creatively reusing reaction shots from different angles, a skill he learned from cutting reality and looking for any bit of usable footage.

All the panelists shared incredible insight about working in both genres and really made the whole discussion relatable. One of the audience questions regarding doing producer notes was, “Have you ever had to lock a cut that you didn’t like?” Tom’s answer was, “Yes, I call that Thursday” which got a big laugh. Molly Shock (Naked and Afraid) shared her thoughts on this and said that if out of 1000 cuts, and there are 100 cuts you don’t like, you still have 900 cuts that you do like. That put things in a positive perspective.

Lunch was served in the cafeteria and I got a chance to talk to a few of the attendees. It was interesting to hear from a diverse group of editors and assistants in various stages of their careers from all over the U.S. One editor had just moved to L.A. a week ago from Atlanta to start a new job the Monday after EditFest!

The next panel was called “Inside the Cutting Room with Bobbie O’Steen: A Conversation with Joe Walker, ACE”. I remember hearing Joe Walker speak at DGC’s Visionaries at TIFF last year, so I was excited to see him again. During the discussion, they showed some of his work on Hunger and 12 Years of Slave, but the most interesting was when they screened a progression reel of a scene from Blade Runner 2049. The scene is where Harrison Ford and Ryan Gosling fight in a futuristic cabaret theatre (https://www.youtube.com/watch?v=NW8Yv8iOfHI). We first saw a rough animatic of the scene with stiff CG models of K and Deckard. Then we saw an assembly of the live footage with roughly temped in hologram images – this got a laugh from the audience because of the crudeness of the comp. Joe Walker even joked that he was expert at temping in vfx. But the interesting thing was the scene was quite different from the final. There were a lot more holograms and the music played constantly throughout the scene. Joe Walker explained that the problem with the earlier version was that it felt too much like a spectacle and it didn’t match the tone of the movie. They decided to go with a different approach and in the end built tension with silence.

They also showed a before and after progression for a scene from Widows. It was a dramatic scene with Viola Davis and Cynthia Erivo in a car with about a page of dialogue. The final sequence had absolutely no dialogue. Instead, the two characters sat in silence and exchanged a heartfelt look before Cynthia Erivo’s character exits. It was extremely effective and told the same story.

The day ended with hors d’oeuvres and cocktails served right outside the main theatre. I got to chat more with Paul Day and Stephen Philipson, and fellow CCE members Christine Armstrong, Ben Allan and Gloria Tong. With more American productions making their way up north, it was great to see Canadian editors represented at events such as EditFest. Thanks again to the CCE for making this happen! To future winners, remember to soak it all in, talk to as many people as you can and you’ll have a blast! 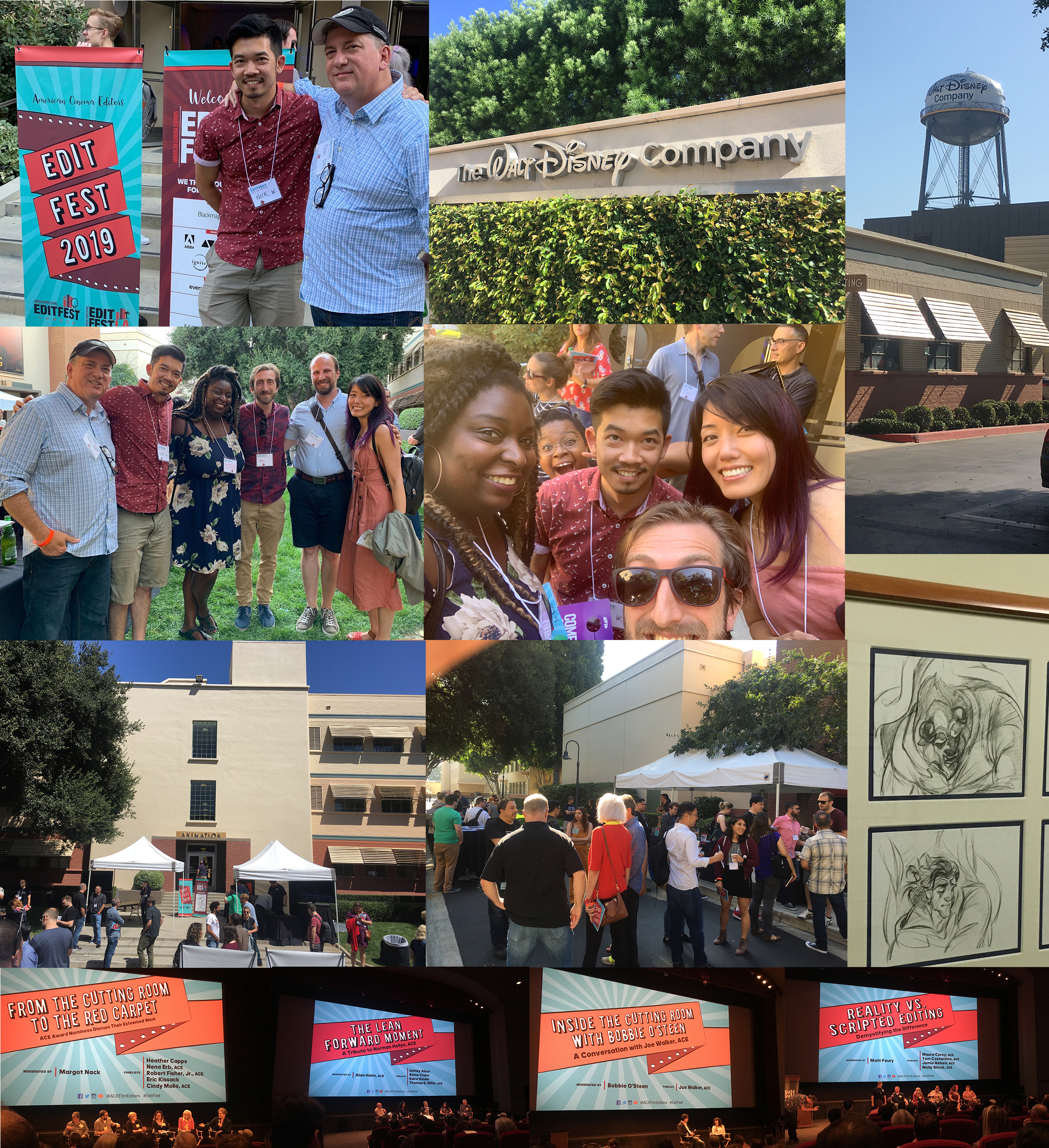